See It! Do It! – Vanguard Religious Awards

See It! Do It! The Vanguard Award

What was it called back then? B.S.L.B.T.C.? That is The Boy Scout Leader Basic Training Course. Six, weekly three-hour sessions – with a cheesy filmstrip series, to boot – capped off by a weekend outdoor camping experience. The training program has evolved several generations since I first participated as a trainee. It was back about 1982 when I first attended. After completing my Wood Badge practical in a subsequent year, training became a point of my Ticket for earning my beads, as I came back to scout leader training as a staff member … and have been doing scout leader training ever since.

When it came to the training segment on “Interfaith Worship”, well that was when the ol’ Aaronic Priesthood juices kicked into “high gear”. Sure, I could conduct that training for a diverse audience of Scouters. I could promote the BSA Religious Emblems Program. I soon became the “go-to” guy assigned to lead that segment. I was confident in my faith and had no problem sharing it. I found it easy, even smooth, during Interfaith Worship to quote an “ancient American Prophet” on some point; not one in the group caring if his name were Alma or Nephi. They’d listen, all the same, nodding in agreement to the wisdom shared at the moment. Beautiful, Spirit-filled, tender moments observed.

So, with my troop being dissolved, my scouting association now focused through the District, well, I still remained aligned with the movement. I took a Commissioner role, serving a pack and troop sponsored by a local Baptist congregation. Still, my foot was in the door with the Council training team.

When Vanguard International Scouting Association was developed to serve as an advocacy for Latter-day Saint Scouters, I was thrilled to “represent”. Let me be useful as I may in promoting scouting as a preferred choice among families of the faithful. I started with my grandsons, now a member of a fine cub scout pack, my daughter on that pack committee.

I resolved to set an example as the Vanguard Award was rolled out. It seemed appreciably harder to earn than the prior incarnation of a Latter-day Saint Religious Award. But, so much for growth; I enjoyed working it.

Upon completing the award requirements and securing the insignia, I had a conundrum – How and Where to present it? I had no troop. There was an obvious answer.

Again, in February, I was invited to participate in Scout leader training. The ol’ B.S.L.B.T.C is now an “indoor” Position-Specific Training and then the Introduction to Outdoor Leadership Skills. Again, I would be out at camp as SPL for the IOLS course. Again, who would instruct the Interfaith Worship segment? Again, as part of that training, I would encourage the trainees to consider the Religious Emblems program as part of their troop offering.

But this time, there was a twist.

I approached the course director, David Black, informing him of this award, newly minted for Latter-day Saint Scouters. Would he be willing to do my presentation for me? “I’d be honored,” he said. David is a man of faith, a holder of the religious award of his own faith tradition.

So, at the evening campfire, toward the end of the festivities, a moment for the training troop scoutmaster was set aside. He stepped forward and presented this Vanguard Award. 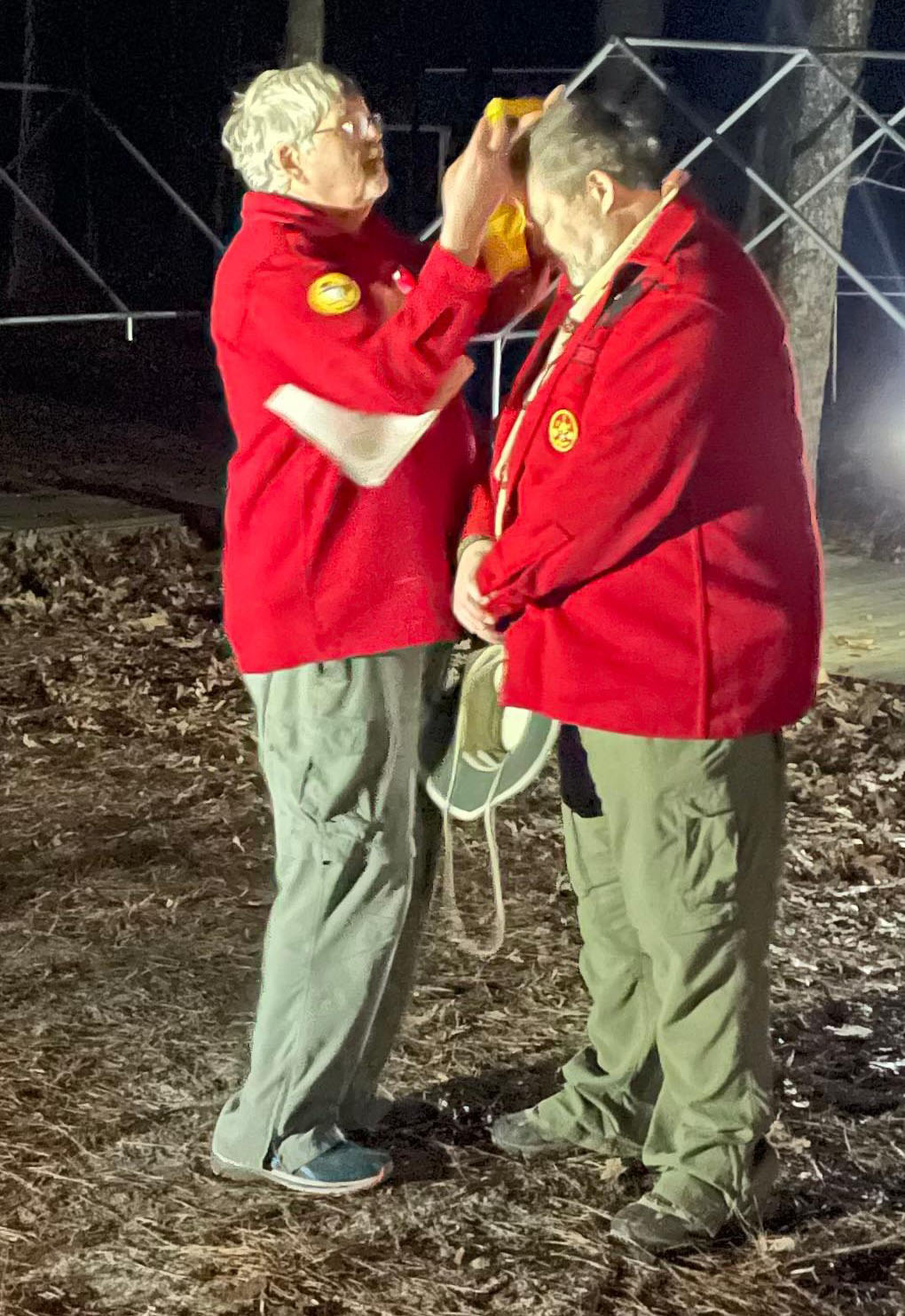 David had taken the time to look up the award requirements to prepare himself for this presentation. He commented, “I saw ‘A Scout is Reverent’ with related requirements; ‘Doing Your Duty to God’ along with requirements; ‘A Scout is Helpful’, ‘A Scout is Kind, Obedient’ and requirements. I am so very impressed how this Vanguard Award interweaves all these spiritual and religious attainments in and around Scouting Ideals.” It was a most singular endorsement. The first award presented in the Cape Fear Council, among the sand and surf, in this coastal Carolina area, near a crackling campfire, in a stirring setting, on a gorgeous night, under a full moon. Another Latter-day Saint in the group approached me who had not known of the Vanguard Award. “I gotta maybe start working on mine,” he said.

So pleased was I that day to be able to “practice” what I “preached”.