It’s Never Too Late to Fly

It’s Never Too Late to Fly

[Published by permission from the “Saints and Scouts” newsletter]

In January 2020 Ruben Gonzales was reflecting on his incredible experience trekking through the backcountry at Philmont Scout Ranch. He had been involved with Troop 1062 of the Rowlett 2nd Ward, Heath, TX Stake. He realized how much he had enjoyed Scouting. However, he also realized his rank advancement had not been a priority.

He turned 16 in February 2020. Around that time, he and his mom, Sandra, decided he wanted to be an Eagle Scout. So, they looked for a local Scout troop and joined one in Rowlett, TX. He began attending troop meetings and asked for help in becoming an Eagle Scout.

After a couple of months, they felt that the adult leaders had not made much progress in putting together a suitable plan. I had been the troop committee chair preparing for Troop 1062’s Philmont experience. I expressed my willingness to help any Scout achieve his goals to all the parents. So, Ruben and Sandra asked me to help him put together a plan to reach Eagle Scout before he turned 18.

Ruben and I met together and developed a schedule to move from 1st Class to Eagle. It was a very tight one. No wiggle room. No missed milestones could be allowed. He had plenty of work to do

Since we weren’t being very successful with the first troop, I helped Ruben join Troop 100 in Garland, TX. The entire troop, youth, and adults, were very warm and accepting. Ruben fit right in. He had been in the troop only four months when he was elected Sr. Patrol Leader.

While progressing towards Eagle, Ruben was fully involved in the troop activities. He went to Philmont a second time. Meanwhile, he progressed on schedule to Star rank, then Life rank. It wasn’t an easy path. Ruben played on his high school football team. He had a part-time job. I had no doubts he could accomplish his goal, but there were a few times when it seemed overwhelming.

When the time came to start planning his Eagle project, it took several months to settle on one finally. He decided to build a small walking bridge in a nature preserve in the city of Garland, TX. He planned to do the construction and installation in late December 2021. Weather and holiday schedules were cooperative, and the project was finished. A couple of weeks after installation, there was a heavy rainstorm. Everyone was very pleased to see that the bridge functioned the way it was intended. 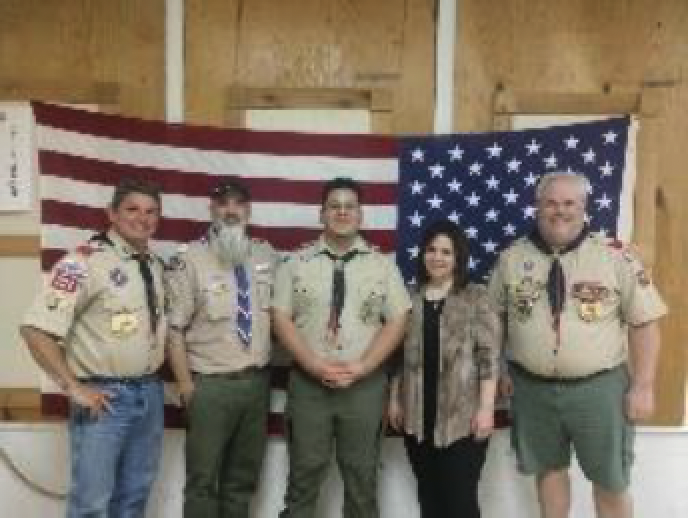 Ruben finally met all the requirements for the rank of Eagle Scout. On March 31, 2022, he was approved as an Eagle Scout. All who know Ruben are excited and so pleased to congratulate him on this accomplishment. We know that he can do anything because he understands what it means to “Be Prepared.”