How Will They Know?

How Will They Know?

It was sometime in late 2001.  I was sitting in a regional Scouting meeting in Ogden, Utah, that included hundreds of those involved in Scouting in that area. I knew most of those involved due to my involvement in the council leadership for many years.  But there was one I did not.  He was the new Young Men General President of the Church and his name was F. Melvin Hammond. It had been a good meeting and he was the concluding speaker. As he stepped to the podium to speak he said words to this effect:  “Before my concluding remarks, I’d like to ask my sweet wife, Bonnie, to step to the piano and accompany me in singing a song with a wonderful message that I believe is important for each of us working with youth.”  He then proceeded to sing a beautiful song that included the final words to each verse:  “How will they know unless we teach them so?”

It has been many years since that day. I have come to revere Elder Hammond as a friend, mentor, hero – and a true Saint, in the real meeting of the word.  (I’m sure that would embarrass him to hear me refer to him with those words.)  And I have used that message over and over again as I have taught youth leaders the importance of their roles in preparing the youth of the noble birthright for the challenges of mortality.  But until this morning, I really didn’t understand how important that message was for each of us.

Early this morning I was cleaning a chapel and opened the materials storage room to vacuum that carpet. As I turned on the light, I saw on a table to my right a rumpled American Flag that I assume had been there since shortly before January 1, 2020. 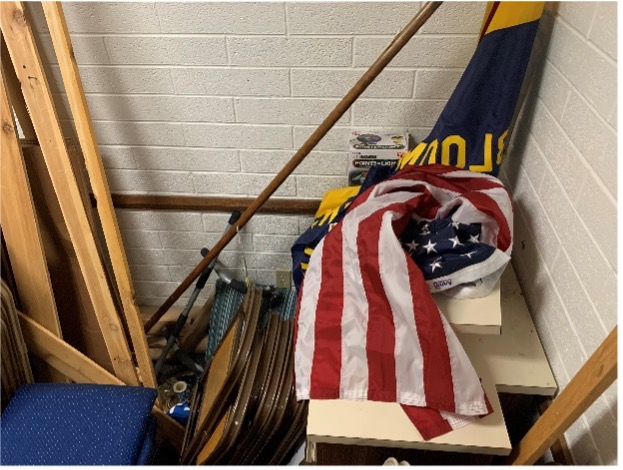 My heart sank as I saw this proud symbol of America, and all this nation stands for, stuffed in a corner on a table and left to molder and decay. I picked up the flag and brushed it to smooth out some of the wrinkles incurred from its prolonged period of neglect, misuse, and abandonment. As I did so, I thought of my father and countless others who gave their time, efforts, and often their lives, to preserve the freedom for which the Red, White, and Blue stands.  I thought of the impact this symbol has had in reminding each of us that we are “…one nation, under God, indivisible…” blessed with inalienable rights, among those — life, liberty, and the pursuit of happiness.  It represents those who landed on the beaches of Normandy on June 6, 1944; those who gave their lives at Pearl Harbor on December 7, 1941; and those who raised the Red, White, and Blue on Iwo Jima on February 23, 1945.  It also stands for those who lost their lives on September 11, 2001, a day that most of us living today will never forget.  It also represents the thousands of policemen, firemen, and other First Responders who gave their all that day and for days and weeks to follow.  It represents those who served in Korea and Vietnam, many of whom came home not to ticker-tape parades, but to feelings of public discontent and dissension – and yet, they, too, served to preserve this great flag and the nation it represents.  This flag of ours stands for Constitution Hall in Philadelphia, Gettysburg, and so many more places across this world where brave men and women gave their time, efforts, and their all to preserve freedom for countless generations to come.

I thought then of the Rising Generation and the importance that value the Red, White, and Blue as much as our generation does and as much as “The Greatest Generation” did. But they don’t – and they can’t – and they won’t “…unless we teach them so.”  And so, my plea is for each of us, as leaders of the youth we serve, to take every opportunity available to pass on those feelings of freedom and patriotism to those of the Rising Generation, that they, too, many carry on our great traditions of freedom and be prepared to give their all for freedom, just as their parents and grandparents and so many before have done. Infuse courts of honor with patriotism and speak to your Scouts about freedom and the Constitution of the United States in Scoutmaster’s Minutes.  As you serve as merit badge counselors for the citizenship merit badges (all required for Eagle), use your interviews with Scouts not just as a time to “pass them off” on their requirements, but to teach and inspire and motivate them with stories and testimonies of patriotism that will stay with them for the rest of their lives.

And the message goes much deeper than teaching patriotism.  It means preparing them—for life and eternity—by helping them understand and practice the principles and values embodied in the Scout Oath and Law and to learn to do their Duty to God and their Country.

And now, back to my experience this morning.  As I looked at that flag, I looked around and found an 8-year-old boy who had come with his father – also to clean the building.  His name was Jude.  I asked, “Have you ever folded a flag?”  “No.”  “Would you like to learn?”  “Sure.” And so together we folded this flag. 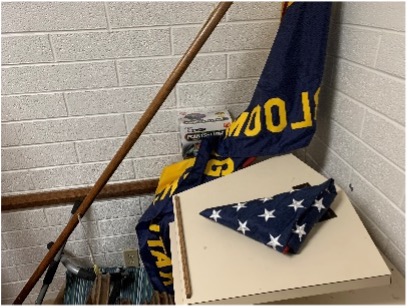 I told him that he would be a great American and a great Scout – and, hopefully, he will think of that experience the next time he sees an American flag.  A small seed, perhaps, but perhaps just enough to help him know.

How will they know, the ones for whom we care

That God is love and with us ev’rywhere,
That life is good, with blessings all can share?
How will they know unless we teach them so?

[Allyse Smith Taylor, “How Will They Know?”]