Welcome to the first article of A Look Back – an ongoing series that highlights a moment in the rich history of Latter-day Saint Scouting.

Before the Church of Jesus Christ of Latter-day Saints received their formal charter in 1913 to sponsor Scouting units throughout the Church, Scouting had already begun in wards in the Salt Lake Valley.

In 1912, an article appeared in the June issue of the Improvement Era magazine that demonstrates how powerful the impact of Scouting had even in these early days. The article highlights the life-saving rescue of a young girl by a 15-year-old Scout (see image of the article below):

“The practical nature of the M.I.A. Scout movement was well demonstrated, last month, by one of its members. While returning home from Religion Class in the Waterloo Ward, Salt Lake City, May 1, little Tessie Dalebout, age 6, slipped into Parley’s Creek, a swift and turbulent stream at this season of the year. The current carried her down the stream for nearly a block, under two bridges, and tumbled her over and over. Two men saw her fall and, rushing across the fields, managed to pull her from the water, but when taken out, the little girl was full of water and apparently dead. Louis Rosenlund, 15 years of age, and patrol leader of the Waterloo troop, which is the first scout organization of the Church, beheld the man running across the field and followed them. They were working her arms and limbs, but without effect. He immediately sent another scout for a doctor, and proceeded himself to use the Schaefer method, which he had been taught in the scout meetings, for the resuscitation of the drowned. After continuing this for about fifteen minutes, the child began to breathe and was taken home before the doctor arrived. She has since fully recovered. Great credit is due the lad for his presence of mind, and his quick application of the practical things learned through his scout organization, which saved the little girl’s life.” 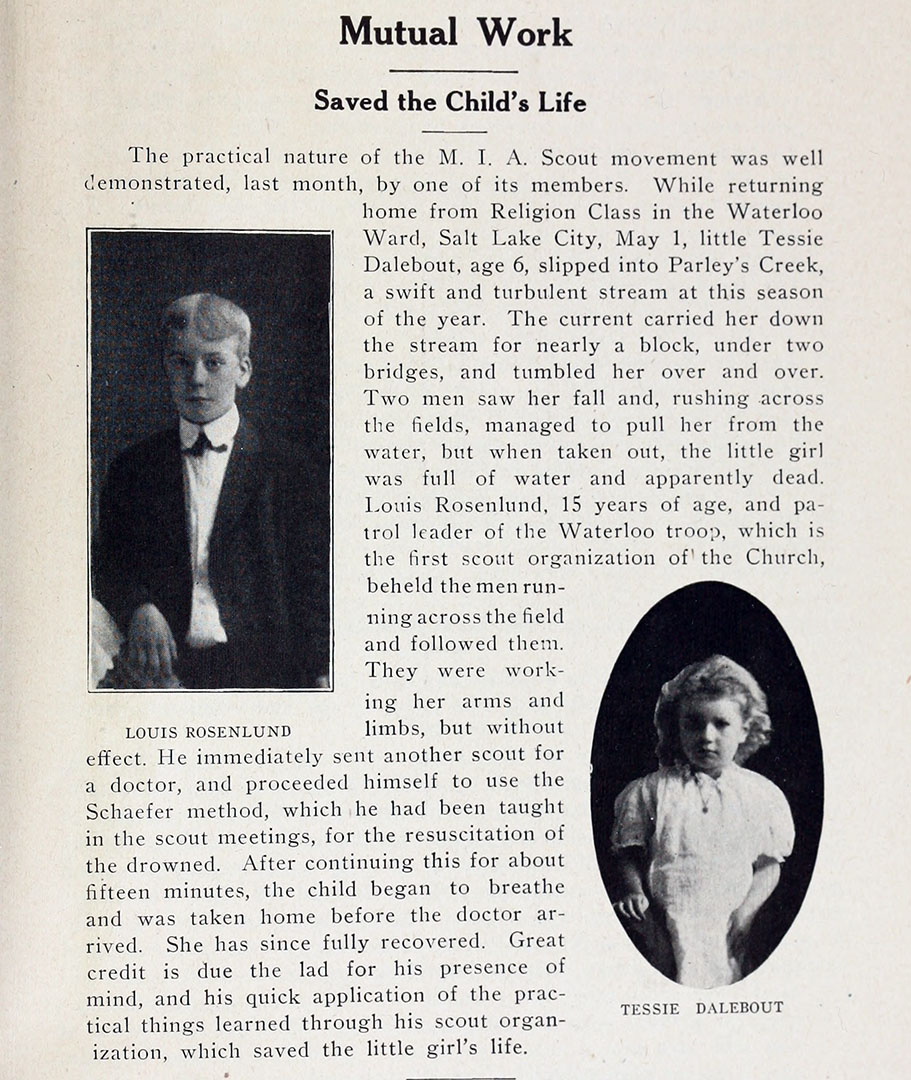