AN EAGLE SCOUT WHO BECAME PRESIDENT OF THE CHURCH

AN EAGLE SCOUT WHO BECAME PRESIDENT OF THE CHURCH

Howard W. Hunter – Many know him as a modern-day Apostle and 14th President of The Church of Jesus Christ of Latter-day Saints, but most members of the Church know very little else about him. He was among the very first Eagle Scouts for Eastern Idaho and later a highly effective leader in that same Scouting program, preparing him for a lifetime of marvelous leadership experiences – beginning with being called as one of the youngest bishops in the Church. 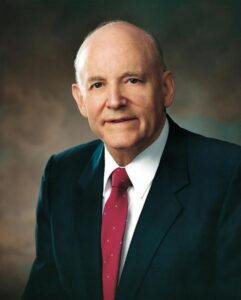 Howard William Hunter was born on November 14, 1907, in Boise, Idaho, to John and Nellie Hunter.  Growing up, he associated with other Latter-day Saint children his age, but his non-member father (who eventually joined the Church twenty years later) did not think one so young could make such a major life decision.  This turned into a bigger problem when he turned 12, when all of his Church buddies would be ordained to the Aaronic Priesthood and participate in passing the sacrament each Sunday, but he could not.  A few months later, and after much persuasion, his father granted his permission.

Of equal if not greater interest for Howard was the Scouting program. In 1920, the Boy Scouts of America (BSA) was barely ten years old but growing very quickly in popularity across the nation.  In his personal diary, he recorded many of his young thoughts, including his excitement at getting a Boy Scout pocketknife as a Christmas present, family prayers for his fellow Scouts, and his frequent outdoor adventures.

Howard joined Troop 22, chartered by the Boise Ward, and became a very eager participant, earning Tenderfoot and Second Class ranks in his first year.  July 1921, his troop went to Camp Tapawingo (an Indian word meaning place of joy) located at Smith’s Ferry on the North Fork of the Payette River.  Here he earned the First Class Rank and his first merit badges.   Afterward, he did more Scouting, earning yet more merit badges. 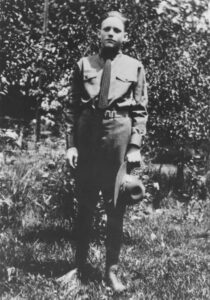 He returned to camp the following year.  “By this time, I had been in high school for one semester and was beyond the rookie stage of scouting,” he explained. “At the encampment, I was selected as Patrol Leader of the Bear Patrol and was on the camp staff.  Each day there were events to keep us busy from the early morning when the bugler played reveille at 6:00 until the last notes of taps at 9:30 in the evening.”

Nine merit badges were completed by Howard this time, and they were awarded to him at a Troop Court of Honor held at the Boise Rotary Club on September 14th, 1921.  Present were the city mayor and other local dignitaries.

Howard continues, “By the time the court of honor was held, I had qualified for fifteen merit badges and for Life Scout and Star Scout awards.  Only six more were required for the rank of Eagle Scout.  The scouting magazine had carried stories of boys who had gained the rank of Eagle, but we were told there had not yet been one in [Boise] Idaho. The race was on between Edwin Phipps of Troop 6 and me.”   But who will get there first?

By March 1923, both boys had earned the minimum number of twenty-one merit badges, but alas, Howard was missing three of the required badges: athletics, civics, and cooking.  Thus, Edwin was awarded his Eagle award first.

Two months later, Howard became the second Eagle Scout of the Boise Council, as noted by this report published May 12, 1923, in the Idaho Statesman:

“Howard Hunter of troop 22, Boise Council, Boy Scouts of America, having qualified for merit badges in 32 subjects, was honored Friday at the city hall by the court of honor of the Boise council with the degree of ‘eagle scout’.  Hunter was given awards for athletics, civics, first aid to animals, camping, poultry keeping, physical development, pathfinding, horsemanship, marksmanship, cooking, and painting.  The honor attained by Scout Hunter is the highest in scouting, and he is the second Boise scout to reach this rank.  The first eagle badge was awarded to Edwin Phipps some months ago.”

His mother, Nellie, “proudly sewed his merit badges onto a piece of cloth, outlining each badge with a buttonhole stitch”.   This ‘cloth’ and photographs of Howard’s scouting work were proudly displayed in the window of a local pharmacy.

Back in 1928, The Church of Jesus Christ of Latter-day Saints typically called upon young men at age 21 to serve a full-time mission.  But at that time, Howard lacked the means to support himself on a mission, so instead, he moved out to Los Angeles in pursuit of better work opportunities.  He soon found himself as part of the Adams Ward, one of the original wards of the Los Angeles Stake, which had just been organized in the prior year as the first stake of the Church in California.

There he received the calling of Ward Scoutmaster.  Over the next several years, he was a very busy person juggling his Scouting service with other church callings, long hours at multiple jobs, studying to get a law degree, and courting a young lady whom he eventually married in 1931, Clara (Claire) May Jeffs.

The year 1935 saw Howard called by the new Hollywood Stake to take over leadership for their Scouting program.  In this calling, he was given the Scouting position of Assistant District Commissioner, in which he represented the Church in the Los Angeles Metropolitan Area Scout Council of the BSA.  At the same time, Howard and his newlywed wife Claire were active leaders in their ward youth program.

Shortly after moving into their own home in Alhambra, Howard passed the bar exam to become a lawyer and, the following year (1940), received a very surprising calling.  Bertram Jones, President of the new Pasadena Stake, invited him to discuss how they were dividing the Alhambra Ward to create the new El Sereno Ward, and they would like him to serve as its first bishop.  At the age of 32, Howard became the youngest bishop of the church in all of California and maybe in the whole world too.

World War II soon reared its ugly head and coincided with the six years he served as bishop.   Because he was considered an ordained minister by the government, he was given a Section 4D draft deferment.  However, many of the priesthood holders in the ward were drafted, and this left his ward critically short of priesthood leadership.

Howard recalled, “We had a group of fine young men who could not be neglected, so I assumed the responsibility of serving as Scoutmaster. I trained them in qualifying for their ranks and helped them with their merit badges. They became quite proficient in camping, signaling, and all of the qualifications of scoutcraft. We frequently went on overnight campouts and did all of the things scouts like to do. I worked with these boys for nearly two years, and they made excellent progress.”

By 1950, Howard was now President of the Pasadena Stake and still running a busy law practice.  It was during this time that his two sons, John and Richard, were old enough to become active in Scouting.

Back then, the qualification for the Camping merit badge was to sleep fifty nights out in the open.   A favorite campsite for the family was the Los Angeles Arboretum, with a lake and jungle foliage that had been the backdrop for the recent Tarzan movies, and it was located only a few blocks from their family home in Arcadia.

One memorable event was a camping trip out to the Mojave Desert.   It was a long drive, and they arrived late, pitching their campsite in the dark.  Howard wrote in his journal what happened after they had climbed into their sleeping bags.  “In the middle of the night a blast of a streamliner woke us with a start and the headlight was shining directly on us.  We were terrified as the train rushed down on us, but suddenly it swerved to the left and screeched by us.”  Their campsite was right next to the main line of the Santa Fe Railroad!

Over the next several years, Howard, John, and Richard participated in several great high adventure treks with their Scout troop.  This included a nine-day, ninety-mile trip down Oregon’s Rogue River in rubber rafts (which was a very new invention for 1951).  They returned three years later to the same river, but this time for a rough ride down in handmade kayaks.  This second trip had to be cut short when their Scout troop lost much of their supplies going over a waterfall, so instead, they packed up the kayaks and what was left of their supplies to hike a shortcut out of the wilderness.  Their riverbank campsite was the setting for President Hunter to give the young men a Bible lesson about the trials of Job.

Needless to say, both John and Richard earned their Eagle Scout rank, as well as recognition for other achievements in school and sports.  They both served as missionaries in the South Australia Mission and were accepted into BYU.

In 1978 the Great Salt Lake Council of the Boy Scouts of America presented Howard W. Hunter with the Distinguished Eagle Award. “It is given only to those who have earned the rank of Eagle and for more than twenty-five years have continued to follow the scout oath and law by serving God, country, and their fellow men.”